No More Deaths: Walking in the Shoes of Immigrants Must-Scream TV

Moving Beyond Our Tragic Past 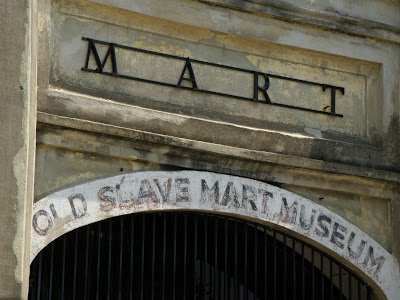 Guest blog by:  Dustin White What was intended to be a carefree vacation in celebration of our wedding anniversary turned out to be a sobering reminder of our nation’s horrific past. It was also a grim realization we have still have not completely escaped. My wife and I travelled to Charleston, South Carolina, a city we visit frequently.  We seem to have our routine when we travel there: a stroll past the shops on King Street, sitting on a bench at the battery while listening to tour guides, eating lunch at the local bar-b-que, and going to the historic marketplace off of Meeting Street. Yet, on this day a haunting realization left me paralyzed amongst the bustling shoppers. This was once the place where baskets, food, and trinkets were not the commodity being sold, rather  it was people who were the goods being purchased. People, sold to other people. People stripped of their humanity and marketed as property. People with hopes. People with dreams. People with names. People whom our God created for the glory of His Kingdom were exploited in a foreign land. The atrocities of the Trans-Atlantic slave trade were still active and thriving less than 200 years ago and Charleston was a huge center for this activity. I stood there in the midst of goods casually being sold, watching people examining the product determining whether or not it was worth their investment.  I became physically ill at the thought this would have been done to people not many years ago. The reality of the oppression many endured leapt from the confines of history books in a powerful way. To escape the haunting thoughts, I reassured myself “those days are gone.” But are they? Even today there are people in our communities being exploited as commodities who are forced to live and work in the shadows.  I spoke yesterday to a group of college students who are studying human trafficking. The professor invited me to share aspects of what it looks like to share life with undocumented immigrants and of how slavery has many different faces. I shared stories of my neighbors and friends as they were convinced by companies entering their villages in Guatemala to come work in the U.S.  They were approached with the promise of a visa, a good job with good wages,  a home, vehicle, healthcare, and education for their children. They soon found themselves exploited in harsh labor conditions, working more than ten to twelve hours a day, six to seven days a week, making far below a livable wage. The home they were promised ended up being a cramped apartment where they were forced to share a bed in shifts with sometimes two other couples or families. The other promises simply did not exist. They are in every sense of the word, a commodity. Once their temporary work visa expires, immigrants once again can become subjected to further exploitation through the existence of private, for-profit detention centers. The privatization of detaining immigrants is a massive industry that thrives by housing as many individuals as possible, whether they are a criminal or not. With 200 facilities across the country, companies net roughly $200 per person, per day.  This amounts to an annual revenue of $5 billion. Powerful corporations are then tapped to contract menial work by detainees for miniscule wages. In one instance of visiting one of these detention centers, a detainee elaborated he was convinced to work as “he had nothing else to do, so he might as well make some money” while he awaited deportation. Is the exploitation of migrant workers identical to the atrocities of the slave trade several hundred years ago? Though not identical, there is the undeniable and heartbreaking reality- people are still sold as products to prop up the affluence of the privileged. There is a hope the prophetic voices will rise up from within the Church with an evangelistic zeal and a courageous boldness to seek justice even in the midst of opposition. Where are the William Wilberforce’s of this generation? When will we hear the voice of today’s Martin Luther King proclaim they have a dream with the courage to live it out? Perhaps those individuals are already among us, humbly living out the standards displayed in the Bible—we’ve simply failed to listen. Maybe those individuals have been in our neighborhoods all along sharing the Gospel of Jesus Christ. It’s possible the voice guiding us towards the call of Jesus is not heard from the tongue of pastors in the pulpits, but from the migrants in our fields, those in detention centers, and the immigrant next door. Dustin White is the Associate Pastor of Dueber Church in Canton, Ohio.  He and his wife Jamie co-founded SOMOS Community, and have partnered and worked with Mission Year, Alterna, the Inter-Religious Task Force on Central America, and as well as the Immigrant Worker Project. They share life with the marginalized, practice hospitality to the stranger, and are active in advocating for the rights of immigrants. Please note that the views expressed do not necessarily represent those of everyone associated with G92 or any institutions with which the blogger may be affiliated.  If you’re interested in writing a guest blog, contact blog@g92.org.

One Response to Moving Beyond Our Tragic Past